My last post has created the desired effects. The intended first-order audience reacted correctly and has began to experiment with cyber phrenology in a manner that will immensely destabilize the civil rights cornerstone of material humanism. Many in the West will consider such experiments abhorrent, but they are no different than the cyber phrenology Silicon Valley has been doing for years. It is fair to assume the intended second-order audiences (state actors, academics, and brand managers) who monitor the Chans will be incorporating the feasibility of the Butterfly War's metadata insurgency into their current metadata arsenal. For as long as Silicon Valley can raise money and secure subsidies, that kind of metadata insurgency will continue to metastasize until it completely consumes the crown jewel of Baby Boomer moral supremacy: civil rights.

If something were to happen that could significantly interrupt the flow of investment into Silicon Valley, their reliance on ad revenue would sharply increase, forcing Google and Facebook to engage in the most overt and insidious manifestations of cyber phrenology. As long as the Chans also engage in a variant of this activity, it will be easy for social justice advocates to emotionally demand the regulation of Silicon Valley, the very financial engine that granted them political power to begin with. This self-sabotaging behavior is the purpose of the Butterfly War: suppressing the Praetorian voice by hijacking their assets en masse.

The Praetorian voice has enjoyed a prolonged influence over cherished journalists, abstract art, feminism and other core institutions of material humanism. They have already sunk their teeth into memetic warfare some time ago and hope to bring it into their wheelhouse. This voice routinely weaves a false reality that promotes destructive military conquests to create endless supplies of cheap labor through displacement and migration. If that voice can be suppressed for a time, then a core part of the cheap labor harvest cycle can be disrupted: 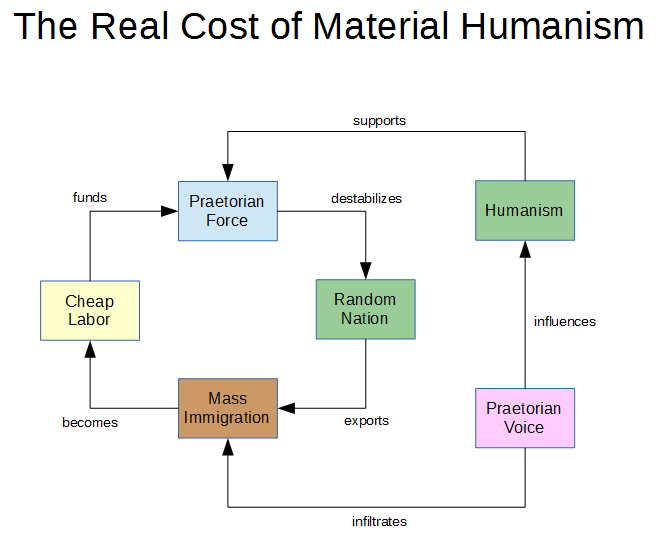 Depriving a nation of cheap labor derived from warfare will create demand for an alternative in the form of robotic labor. Without such feasts for the carrion, the ravens will starve long enough to irreversibly settle for that alternative.

The Robodollar (03/15/2019)
How the world order can survive in a post-Icarus world
What Is A Cult State? (07/30/2018)
All nations must start as cults
The Butterfly War Begins (12/13/2017)
Asserting what Butterfly War means
The Butterfly War (10/13/2017)
Spoof the metadata of minorities to take down Google
The Pivot (04/30/2017)
Nationalism has a chance as long as globalism is aggressively paranoid
Cyber War Cometh (10/17/2016)
Julian Assange isn't messing around.
The Planned Destruction of the Alt-Right (08/26/2016)
Chat logs of the planned destruction of the Alt-Right brand
The Shadow Emperor Hedge (06/15/2016)
Tech giants from the 90s and their Middle Eastern steersmen
Challenging the profit motives of globalism versus nationalism (02/28/2016)
When globalism fails, how can nationalism be used to balance the ledgers?
The War On Spontaneous Global Organization (01/23/2016)
Cass Sunstein leaves no stone unturned
After sixty-five years, France finally admits the end of Continental National Socialism (11/14/2015)
Continental National Socialism is the organizational method that emerges from the confluence of Swiss banking influence, German export dominance, and the remnants of French and Dutch colonial power suckling off of British and American geopolitical activity.
Petrocurrency Mercantilism (02/28/2015)
How the world actually works
The Putin Short and the Drone Long: The Rise of Petrocurrency Mercantilism (09/09/2014)
The birth of Robotic Nationalism
Progressive Dependencies: Petrodollar and Exporting Inflation (08/31/2013)
You can't spell social justice with "I Access Oil"